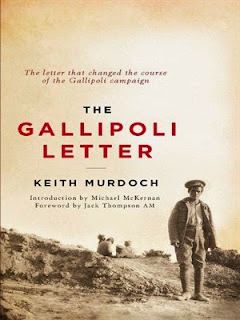 This was a short book, and mostly contained the complete text of the letter compiled by Australian journalist Keith Murdoch – yes, the father of News Corp CEO Rupert – with a foreword by historian Michael McKernan that adequately sets the scene.

The letter was composed from Murdoch’s mind, after a similar letter he’d been asked to bring off the Gallipoli peninsula by controversial British journalist Ellis Ashmead-Bartlett was intercepted by French military police in Marseilles after another British journalist had tipped off British High Command.

Murdoch’s letter was incredibly well received by political factions seeking to end the Gallipoli campaign, which they determined to be nothing more than a sideshow to the real war – against the Germans on the Western Front.

Lord Kitchener and Winston Churchill, the two minds primarily behind the plan, were politically leveraged out of continuing the (stalemated) fight to break through the Dardanelles. After nine months of futility and so many deaths, you would think that Kitchener, particularly, being the military genius that he was, would’ve worked out that the Turks were dug in to stay. At any rate, Murdoch’s letter helped things on their way. It was the snowball tossed from the summit, and that snowball would later grow bigger, and the campaign would be called off.

So Murdoch’s role is a crucial one, and this was one of the first signs of the power of the media and, in particular, investigative journalism. Ashmead-Bartlett, an experienced battlefield reporter who favoured novel-like prose to bring events to his readership, as compared, say, to Australia’s official war historian Charles Bean who was more into the nuts and bolts of any given engagement.

Ashmead-Bartlett was not a favourite of the British High Command, most likely because he sought to tell the true story of Gallipoli, whereas Kitchener and his group wished to tightly control the narrative of the campaign, fearing both military and political fallout from a failed attempt to force the Dardanelles.

Murdoch was on Gallipoli ostensibly as a representative of the Australian government inquiring into mail and supplies for Australian troops after losing out to Bean in the race for official Australian war correspondent. Ashore at Gallipoli, he befriended Ashmead-Bartlett, who had concerns about censorship of the campaign. They were two peas from the same pod.

The letter was written – addressed to then British Prime Minister H.H. Asquith – and believed to be a secret between Ashmead-Bartlett and Murdoch. Alas, it was not, though being removed of the first letter did little to deter Murdoch, whose own copy, written during his time at the Australian High Commission in London, was addressed to Australian Prime Minister Andrew Fisher. In tone, it was similar to Ashmead-Bartlett’s: hugely critical of British generals. David Lloyd George also received a copy, and soon the true account of Gallipoli was published throughout England, thanks to The Times and the Daily Mirror, and their influential proprietor, Lord Northcliffe.

It’s interesting to note that in the beginning, Murdoch was shocked that his Gallipoli account had been made such public knowledge, but soon became friends with Northcliffe, leading to a long and impressive journalistic career.

There were some exaggerations and mistakes in Murdoch’s account, which was, remarkably, written from memory, and it led to Hamilton being removed from command, and then, finally, the evacuation of Gallipoli a few days before Christmas, 1915. It was the first sign of the power of the press, and Hamilton’s scalp was a big one.

So Murdoch’s work brought about the end of the campaign more successfully than any Turkish counter attack did – and we, as Australians, should be very thankful for that small mercy – and the first few pages of The Gallipoli Letter provide more background on both the English political climate at the time, and Murdoch’s experiences whilst on the Peninsula.

The Foxtel television series Deadline: Gallipoli (and, to a lesser extent, the Nine Network’s Gallipoli) delve into Murdoch’s role in the end of the campaign. Both shows are excellent.
Posted by Kitch at 1:36 PM