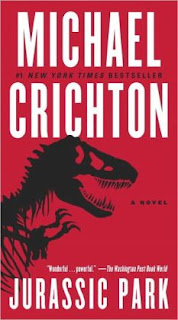 It occurred to me on the way home from watching Jurassic World (Review) at the cinema the other week that I’d never read the Michael Crichton novel that was the basis for the enormously popular series of films, and all the other merchandise that’s come along ever since.

That was an oversight I knew needed correction. So, when it came time for a new book, I started Crichton’s masterpiece and quickly realised that the novel had been given something of an overhaul for the movies. None of the characters seem the same, aside from in name, and their fates are different in Crichton’s novel to the Steven Spielberg film.

Focused more on the technical details of dinosaur breeding and the Chaos Theory that mathematician Ian Malcolm swore would bring down the ambitious theme park for which John Hammond’s people have created a herd of dinosaurs (including the vicious raptors and the enormous Tyrannosaurus Rex), all the explanation of DNA and such make you think, for a few moments, anyway, that something like Jurassic Park could almost occur in real life.

Crichton’s novel is far more complex and violent than the movie. It also fleshes out a lot more of the story, and Jurassic Park itself. Hammond’s portrayed as a fairly crazy sort of old guy, rather than the grandpa-type figure Richard Attenborough plays him as in the movie. Dr Henry Wu, a big part of Jurassic World, was a big part of this novel, too.

In the beginning, Crichton had no plans to publish a sequel – at least until Steven Spielberg came calling – and that shows, given the way the book ends. There’s a sense of great finality about the final few pages, when the authorities swoop in to deal with the dinosaurs who have taken over the island. It works better.

Jurassic Park is the third Michael Crichton book I’ve read – Timeline and Congo were the first two – and by far my favourite.
Posted by Kitch at 5:06 PM