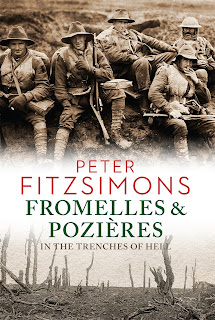 Right from the beginning, FitzSimons, the rugby player turned historian, hits the nail on the head.

In his introduction to this extraordinary story of Australian heroism against incredible odds – both German opposition and the ineptitude Sir Douglas Haig and other British officers who command Australian men on the Western Front – FitzSimons says that the following tale is one that we, as Australians, should be both proud of and angry about.
That sums up the two battles, the first serious action for Australian forces on the Western Front, half a year removed from the conclusion of another campaign that we should both be proud of and angry about – Gallipoli.

Reading page after page of British generals in chateaus moving flags across a map and ordering more attacks against obviously-entrenched enemy forces was maddening. The fact that these commanding officers declined to even scope out the ground over which they were asking men to – futilely, in most cases – attack is damn near criminal, and, of course, the reputation of British GHQ wasn't exactly enhanced by these early disasters on the Western Front.

Funny, isn’t it, that when Monash took over command of the Australian forces in France and Belgium for the last six months of the war, that the diggers never lost a battle. You can only imagine what they might have achieved had the British placed Australians under Australian command earlier, rather than lump them under Haig’s watch, this man who still believed that the war could be won with frontal charges and loosing his cavalry in their wake.

Fromelles was a disaster and Pozieres was an extraordinary victory in a pyrrhic way, but both illustrated the Australian resolve – something even the Germans acknowledged on a few occasions – under even the most trying circumstances, like the fearful artillery bombardment at Pozieres, and the disastrousness of having British commanders whose minds were still fixated on Napoleonic-era tactics.

General Haig and his protégé the equally inept General Haking – a real “thruster” according to Haig – are not portrayed in a particularly good light in the book, and nor should they be. The way they continually threw men against well-entrenched enemy with machine guns crisscrossing No Man’s Land is tantamount to sanctioned murder. That fact was not lost on the Australian diggers, and many passages lifted from letters and diaries suggest as much. Even the generals, like ‘Pompey’ Elliott are scathing of their British superiors. For good reason, too. Elliott was clearly a great man, loved by those he commanded.

As ever with FitzSimons, the research is deep and thorough, and he’s identified enough light-hearted moments to raise the levity at least a little when the going gets tough. Some people don’t like the way he often writes using the slang of the era – switching between being a straight-up historian and a novelist – but it didn’t take away from my appreciation of his work.

Fromelles & Pozieres may not be a forensic history in the way of Antony Beevor, but I don’t always need that sort of breakdown. FitzSimons’ work moves along nicely, never lagging, which isn’t something I can always say of Beevor. And besides, the more people who understand what our men achieved, and against what odds, in those two battles in the European summer of 1916.

I’ve never understood why our nation continues to fixate on our failed World War One campaigns – Gallipoli – and forget about victories like Pozieres and, later in the war, Villers-Bretonneux and Hamel, amongst others. For that reason (quite aside from it being a good read), FitzSimons’ work deserves to be feted.
Posted by Kitch at 8:16 PM