We wanted the best and, oh man, did we get the best! 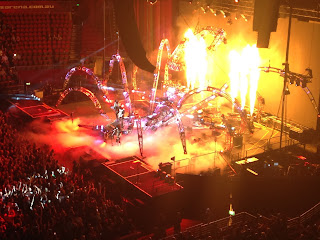 As any one of the near-capacity crowd of twenty-thousand who packed into Sydney’s Allphones Arena last night can attest, the power of a KISS show is still immense even after forty years.

Or, perhaps it’s because they’ve had four decades of experience playing stadiums and arenas – think of that, how many other bands can lay such a claim? Other than the Rolling Stones, not many at all – that Paul Stanley, Gene Simmons, Eric Singer and Tommy Thayer know what it takes to grab an audience by the scruff of the neck, buffet them with heavy guitars, thumping drums, flame bursts, lasers, smoke bombs and some of the greatest rock anthems ever written, and send them home happy.

If you were in the audience last night, and you didn’t enjoy the show, which ran for a pleasing two hours, you’re either lying to yourself or you hate rock music. KISS know what their fans want, and they deliver in spades. The new spider stage – something you have to see to believe – is the centrepiece of a spectacle that is unrivalled in rock today, and will probably never be topped in the annals of rock music history…except maybe the next time KISS tour. 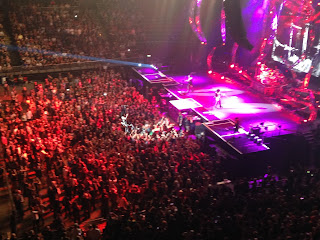 Of course, Australia has always been a happy hunting ground for KISS, stretching way back to the 1980 tour dubbed Kisteria, but Australians are notoriously fickle when it comes to performing artists not from these shores. Big overseas acts have been roundly panned and abandoned here. Not so, KISS. Despite line-up changes over the years, and a switch from face paint to being unmasked, a few farewell tours, and some more line-up changes, the band still draws a crowd.

It was the band’s third show in as many nights, having played Melbourne twice, and singer Paul Stanley, who’s voice is, let’s face it, not what it used to be, could probably have done with more of a break between performances. His voice was wearing thin towards the end, but the ample supply of Gene Simmons-sung numbers – including ‘War Machine’, ‘I Love It Loud’ and a pulsating ‘God Of Thunder’ sung from the Allphones rafters – saved the show from disaster.

Look, everyone knows that Stanley’s voice isn’t what it once was. The people in charge of the tour should have recognised that three shows in a row might not have been the smart move. Stanley was searching hard for the high notes late, and not always finding them. It was a situation that could easily have been avoided. A day or two off and Stanley would’ve been fine. It’s just as well that KISS aren’t playing tonight. 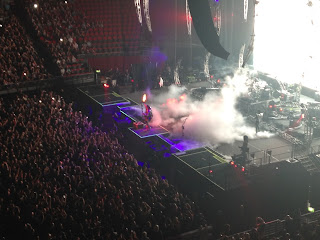 Aside from Stanley’s voice giving up the ghost late, this was a powerful show. I love the new set list that includes a more even split of songs sung by Stanley and Simmons (and Eric Singer’s ‘Black Diamond’ was as good a vocal performance as there was all night) simply because there are some great Gene songs that didn’t always get a look in. The afore-mentioned ‘War Machine’, for example. That is a brilliant song to hear live!

Just as you would expect, all the old favourites were there – ‘Detroit Rock City’ to open, as the Spider Stage lowered the band from the rafters to the stage, ‘Lick It Up’, ‘Love Gun’, ‘Deuce’, ‘I Was Made For Lovin’ You’, ‘Shout it out Loud’ and the memorable confetti-soaked show closer, ‘Rock and Roll All Nite’ – and all sung with a searing, hard edge. As good rock should be!

‘I Was Made For Lovin’ You’ may sound disco-tinged on a record, but on the stage, it’s as heavy a song as the band has in their catalogue. ‘Love Gun’ is even more bombastic live than on the record (and was sung by Stanley after taking a flying fox across to a B-stage in the middle of the arena), and everything from Creatures of the Night is titanium-tough. Even ‘Hell or Hallelujah’ from KISS’s most recent release, 2012’s Monster, is epic. It’s going to be a classic, Stanley tells us. And, having heard it live a few times now, I don’t doubt it.

Then there was the flame, smoke, fireworks and laser lights that, nightly, transform KISS from being a normal rock band to one of the can’t-miss Bucket List performs in the history of rock. Gene’s blood spitting and fire breathing isn’t new, but it’s a It’s an assault on the senses in the very best sense of the world, and I remain convinced that the band’s arsenal of things that go BOOM! Is bigger than some small country’s! 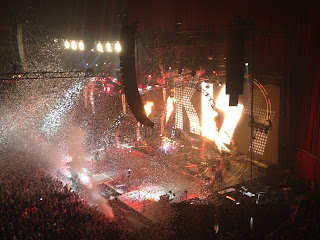 For guys who are getting on in age, they move so smoothly around the stage, despite doing it in platform heels, clad in gear that, whilst it looks good, probably isn’t hugely practical for what they do. Gene must sweating like a machine beneath his body-encasing armour, but he never shows it. His on-stage act, whilst perhaps bordering on comical/pantomime at times, is a highlight.

Paul Stanley is the ultimate showman. The way he commands an audience is beyond impressive, as is his ability to move around the stage like he’s gliding a few inches above it. He’s definitely the ying to Simmons’ Yang, and the two as an on-stage force are just about unparalleled in rock. You think of great on-stage combinations – Jagger and Richards, Axl and Slash, Bono and The Edge, Springsteen and Clemons – and realise that Stanley and Simmons are right up there.

Special mention to Tommy Thayer and Eric Singer on guitar and drums. They’re brilliant musicians – and, by all accounts, brilliant people, too – and KISS fans should thank them for their service rather than comparing them to their predecessors. After all, without their efforts in the wake of well-publicised issues with Ace Frehley and Peter Criss, there’s a very good chance that KISS wouldn’t exist today. For mine, Singer is a better drummer than Criss ever was. 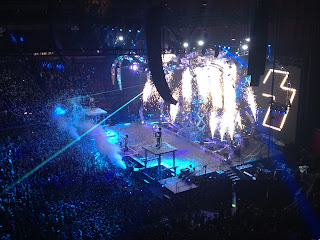